Football is powerful. Its influence goes beyond the pitch and beyond the full-time whistle. And, for now, football is a majority male sport, in participation and watching it.

So what better place to take action against the epidemic of misogyny, sexism and male-on-female violence.

Because it’s time, it’s way beyond time, that men took personal responsibility for what all women have to endure, day in, day out.

This is a problem for men to resolve, not women.

Lewes FC’s men’s team wanted to do something, as a group and as individuals.

So, when anyone in the men’s team (and managers, and coaches) hears or sees something said or done by a workmate, family member, friend or anyone they’re with, that they feel is disrespectful, sexist or harmful in any way to a woman, whether she’s there or not, they will speak to that man and they will #CallHimOut. That might make them feel uncomfortable. But nowhere near as uncomfortable as the women on the receiving end of every demeaning comment.

Our men’s team are good guys, like so many men, but now is the time to take action. And that action will include each man also calling themselves out sometimes, by going back on an ill-judged comment, by saying “Sorry, I shouldn’t have said that”. This is a decision that starts within each man, to be part of the solution and not part of the problem.

“What stuff should I call out? Who decides?” people (men) may ask. The answer is that each man will develop their own radar, their own code and will know, in their heart, when something needs to be called out. There will be in-house dialogue sessions too for our players/coaches to decide amongst themselves how best to spread this commitment and to support each other.

This is something that every man can do and it will make a difference to women’s everyday lives.

Will you join us? 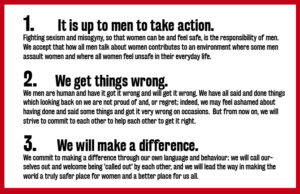